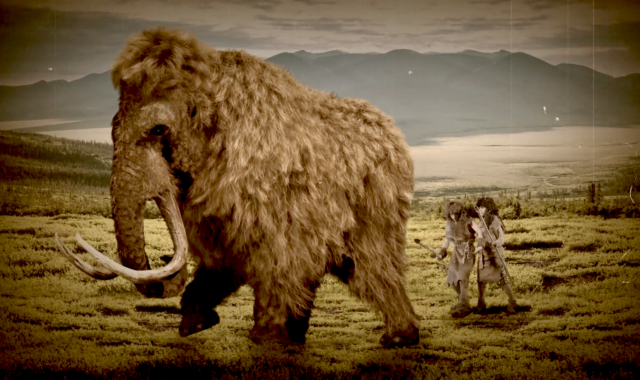 IT’S 10,000 BCE, AND THERE’S NO GROCERY STORE FOR FOOD. ALL YOU HAVE IS A SPEAR … AGAINST A WOOLLY MAMMOTH. DO YOU THINK YOU HAVE WHAT IT TAKES TO SURVIVE AS A CLOVIS KID?

Let's transport ourselves back in time and discover what people did to survive ... by hunting huge woolly mammoths! Watch the video to start your Paleo adventure, or hunt down the lesson activity to discover what tools Clovis Kids used to survive. 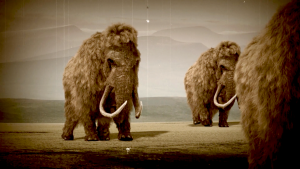 Whew! That was quite the trip … Now what do you see around you? Back in 10,000 BCE, there were no cars to help you travel, no electricity for lights or gadgets, no houses for shelter, or grocery stores for food. Instead, there is a harsh landscape. Half of the continent is buried under ice sheets from the ice age.  And as the glaciers receded, they left behind a cold and windy tundra landscape that is filled with paleo megafauna:  huge wooly mammoths, saber tooth tigers, giant beavers, sloths, and dire wolves.

Okay. So how did our ancestors survive in a place like this? It’s so scary! 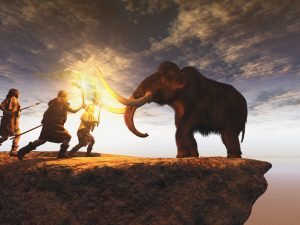 Back then, sea levels were much lower and exposed a dry piece of land called the Bering Land Bridge that humans and many terrestrial animals migrated across. One of the first people to cross this bridge and brave this landscape were the Clovis people. These Paleo-Indians were skilled hunters of big-game … especially of wooly mammoths. By collecting meat from these large animals, they could sustain their clan for months on meat. You know why? Because wooly mammoths were BIG prehistoric elephants. They weighed about 8 tons and could get up to 15 feet tall. That’s almost as high as a house! So what made Clovis hunters so special that they could bring down an animal this gigantic? 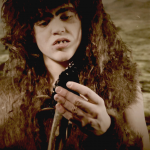 Huh … well the secret is actually in their name. “Clovis” people had a tool in their arsenal that proved very efficient in taking down large animals. It was called a “Clovis point,” which is a spearhead that is made out of flint. Hunters would knap this silica rock into sharp points and attach them to wooden sticks to create a spear.

Even so … fighting with just stick and stone could be really dangerous. So why risk your life for just a couple of meals? And what are the costs and rewards to doing this? The answers to those critical questions are only a spear throw away! Just click on the video below to find out. Or check out the “Learn More” section or lesson activity below to continue your caveman discovery.

Here’s a puzzler for you …. Would you want to be a paleo-hunter or a modern-day hunter today? Read the challenges and rewards below to make a decision.

No matter what you decide, consider the challenges our ancestors had to face in order to survive. And if you are interested in experiencing your ancestral heritage, visit hunter-ed.com to start your journey as a hunter!