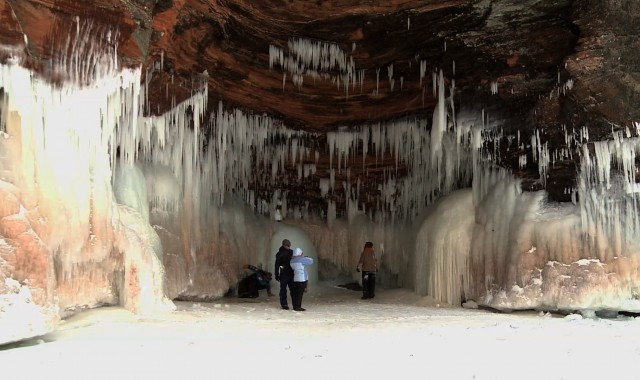 Did you know that, in northern Wisconsin, there are caves filled with icy formations right on Lake Superior? Talk about a really “cool” topic.

The steep sandstone cliffs along Lake Superior have been weathered by wind and waves for millions of years. In some places, this erosional action has formed caves in the rock. When winters become especially cold, ice can fill the caves and create a place begging to be explored. Watch the Serious Science video to discover nature's secrets about these fascinating features. When you see how much fun the ITO adventure team exploring up there and how much they learn, maybe you’ll be inspired to “chill” up there yourself. Be sure to check out the lesson activities below to share in classroom learning about rocks and erosion. Don’t forget your hardhat... with earmuffs.

These lessons offer students an opportunity to understand the characteristics of different rocks, everyday uses of minerals, and learn more about local geology. Don't worry... you don't need to be a ROCK-et scientist to get something out of these lessons. Click the link to the lessons below to get started.

What are these strange things called “Ice Caves”?

It all began hundreds of millions of years ago when sands were washed into an ancient ocean, forming bedded sandstone rock layers across Northern Wisconsin. Much later, the area was “geologically uplifted” and exposed the massive sandstone layers to the erosional effects of weathering from waves and water.

To learn more about the rocks along the shores of the Great Lakes, download the free lesson activities at the bottom of this page.

Now back to the ice caves…. Over time, the powerful forces of wave erosion along the shoreline of Lake Superior carved sea caves along the Mainland Unit of Apostle Islands National Lakeshore. Where wave action erodes and undercuts the base of a cliff, a feature known as a “reentrant” develops. Sea caves are produced when a number of these reentrants join behind the face of a cliff, leaving behind supporting pillars and arches. They develop most easily where the sand layers comprising a rock formation are very thin.

The sandstone bluffs that border the lakeshore there make for an ideal setting for the formation of ice caves – when winter weather conditions are right. Each winter ice forms on Lake Superior when waves splashing against the rock face begin to freeze on the sandstone cliffs. The more frigid the weather, the faster the ice forms along the rock bluffs and within the eroded caverns. Adding to the ice formations, water seeping between cracks in the sandstone rock layers freezes and forms a variety of features similar to limestone caves. But here, the stalactites and stalagmites are made of ice. Iron leached from the rocks can stain some of the ice formations pink or orange. While some formations with water splashing from the crystalline waters of Lake Superior can appear “ice blue”. There are also large icicles and formations hanging off of the cliffs that form curtains and columns of ice, and abundant ice crystals.

Before planning a summer paddling or “ice cave” winter trekking trip to the area, check the websites below to find out conditions and safety concerns.