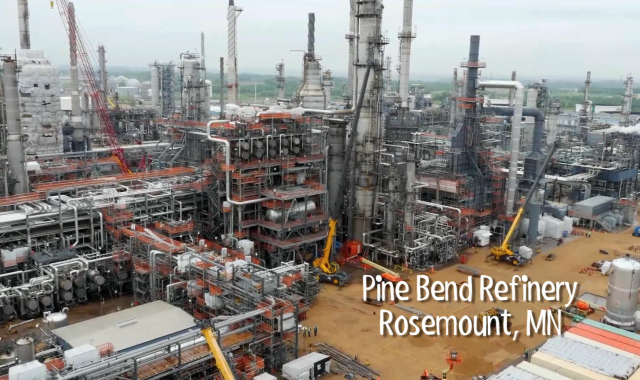 How can science and technology convert the decomposed carbon-rich juices of ancient life into gasoline to power our vehicles plus make the asphalt to pave our roads?

Unlock the answers to the physics, chemistry and science of hydrocarbons as you watch this "Emmy-Winning" video. You'll discover the technology of how oil is transported through pipelines to one of the most advanced oil refineries in North America. There, we'll explore the technologies used throughout the refining process, and discover how the refinery conserves natural resources. So start “refining” your knowledge by watching this video, then dive into extended classroom learning by using the Discussion Guide (coming soon!). 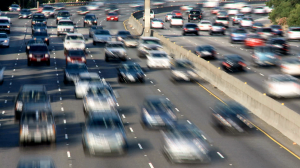 Have you ever wondered where the fuels that power our vehicles comes from? Or, have you thought about how they turn syrupy black crude into the clear gasoline and fuels that drive our society? Well, ponder no more. You’re about to get a serious introduction to the science and technology of refining and transporting hydrocarbons. 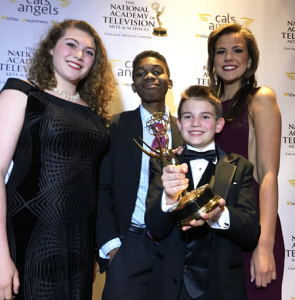 There are two ways to learn here: You can simply watch this “Emmy-winning” video above or read more of the background information below. Doing both can double-up on your smart meter. As a side note, the National Academy of Television Arts & Sciences was so impressed with this production, that they awarded it with the Emmy for the top Youth Educational Program-Series in the Midwest. Woo-who! A big shout-out to our ITO youth scientists shown here with their well-deserved Emmy at the awards ceremony in Chicago. See the video to the right.

Before we get started however, let’s consider your previous knowledge base about the petroleum industry. Chances are you’ve likely “learned” more about the oil industry from the news than from hard science sources. One of the rules of being a scientist is knowing how to evaluate potential bias of your information sources (including us). And news by it’s very nature focuses on negative events cast in extreme situations. So it’s little surprise that the news about the oil industry is sometimes presented in a negative light. Oil spills make for dramatic news stories, yet we seldom if ever hear about how the industry plays a vital role in powering almost every segment of our industrial society. Without it, we’d pretty much grind to a halt. Consider that as you begin “refining” your own critical thinking by exploring the science and technology here that begins to decode refining and transporting the fuels that make our modern lives possible.

Let’s start by digging into the science behind the formation of crude oil. Did you know that crude oil was formed from the decomposed body parts of ancient marine organisms?  We’re talking real tiny stuff here like algae and other microscopic organisms such as zooplankton. Nope, there’s no dinosaur juice or ancient forests in that formed oil.

One of the keys to this ancient marine life eventually becoming oil is being trapped in a sediment layer. This layer also had to be free from oxygen in an “anaerobic” environment to prevent scavengers from eating them. As more accumulating sediment layers buried their body parts deeper, pressure and heat essentially “cooked” their organic matter into hydrocarbons. And that’s how crude oil was formed. Despite the common misconception, an “oil reservoir” in the ground isn’t a giant cave in the earth filled with oil. Instead, the oil in a reservoir rock is located in the tiny interconnected pore spaces in the rock. In fact, some rocks such as sandstone, can have up to 30% porosity, or interconnected pores spaces for oil to occupy and flow through. See for yourself sometime by filling a cup with sand, then slowly pouring about a half cup of water into it before it overflows. The water seeped into the 50% “porosity”.

Once a reservoir is drilled into and the crude produced, it needs to be refined. Crude oil straight from a well by itself isn’t useful for much of anything. Oh sure, it will burn, or mess up your clothes. But it sure won’t fly a jet or run in your vehicle. Rather than try to explain the whole process, you’re better off watching the video above as you join our science team as they explore the entire process at Pine Bend Refinery, one of the most complex refineries in North America. As you’ll see in the video, with the help of Flint Hills Resources engineers, they reveal the chemistry behind crude oil and touch on why it’s vital to so many aspects of our lives. 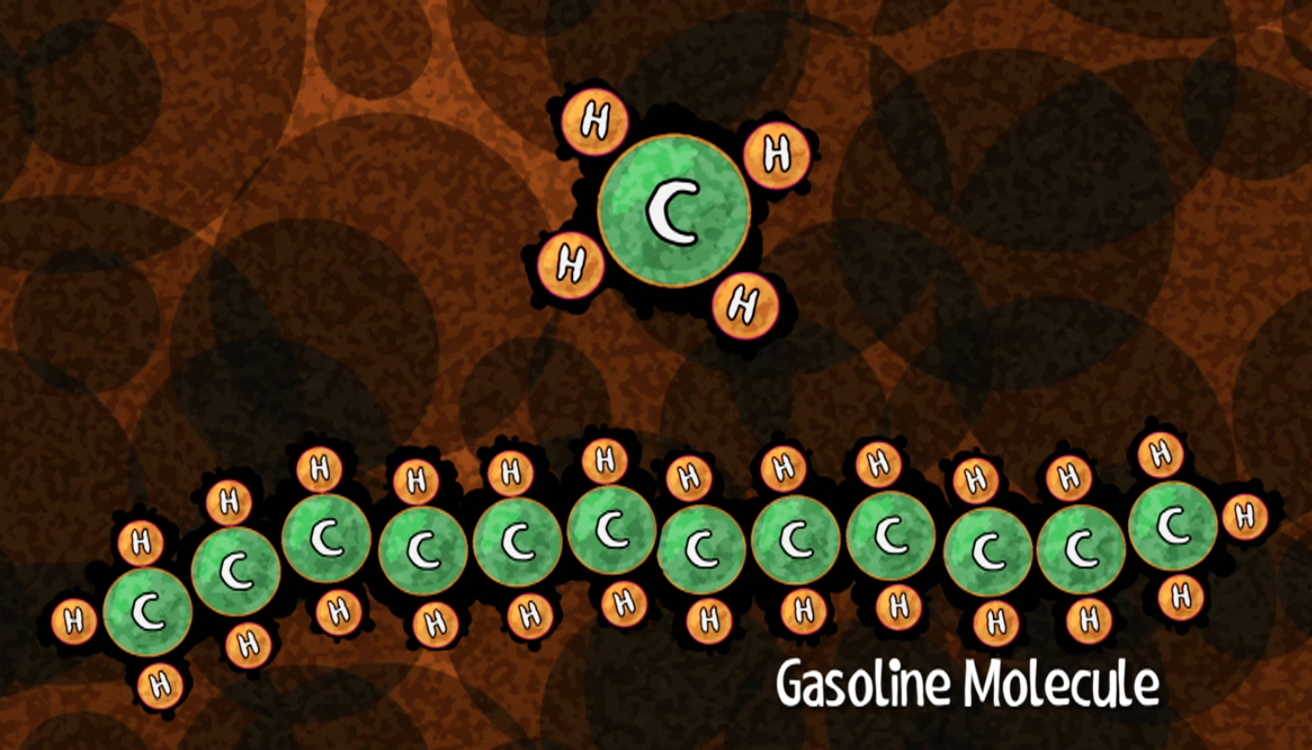 As you’ll see, one of the early phases of refining is the process of “fractional distillation” where they “cook” off the various hydrocarbon fuel “fractions”. Yeah, it sounds confusing. But watch the video for a refined picture of how it all works. You’ll also get to see how the refinery’s very own version of mission control operates this complex refinery that’s the size of a small city. You’ll also learn how refinery experts use physics and technology in the refining process to remove impurities such as sulfur. They also use combinations of catalysts along with heat and pressure to enhance chemical reactions. 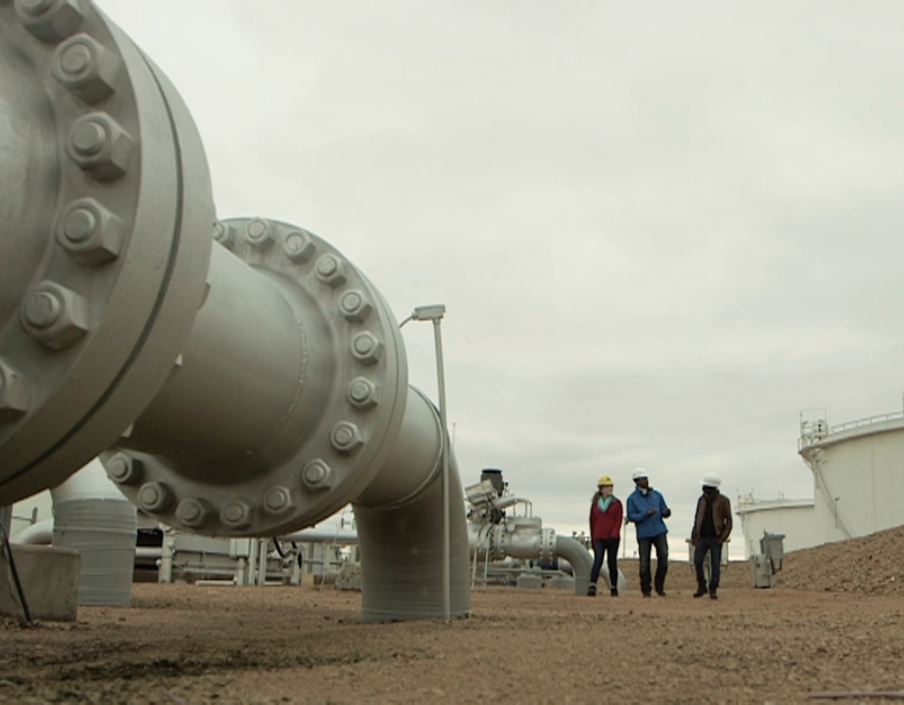 s have in common with oil refining? As you’ll see in the video, they help conceptualize the refining process of “cracking” longer, heavier hydrocarbon chains of molecules into shorter chains that make up various fuels such as gasoline and jet fuel.

As you’ll also see, it’s pretty hard not to notice the steam coming out of some of the refinery towers. We know that steam comes from water and that fresh water is a precious resource. So our hosts also live up to their name of Into the Outdoors by getting to the bottom of how Flint Hills Resources manages, recycles and protects the water resources they use.

All these refined fuels eventually need to get from the refinery to the industries and businesses that use them, right? We sure can fill up our cars at the refinery. So pipelines offer the safest and most reliable method of transporting those fuels to all the various distribution points in society. That’s why our team decodes all the pipeline connections, with the help of various engineers while exploring the physics behind transporting fuels via pipelines. Because pipelines span huge distances across all kinds of environments, our video team also digs into the technology engineers use to monitor pipeline integrity to prevent leaks and how they repair pipelines that need attention.

To dive deeper into all this the science and technology, watch the video above as your primer on the topic, then expand your learning by sharing the Discussion Guide (coming soon) with your teacher and classroom for some serious peer-driven learning.

And to learn more about refining and transporting petroleum products, visit the links of the educational partners that supported this episode.

How different would our society be without fuels like gasoline, machine lubricants, or asphalt for our roads? For starters we wouldn’t be able to drive because there wouldn’t be any roads or cars. We also couldn’t exchange modern goods with other countries because jet fuel and fuels for ships wouldn’t exist. The machines that produce our technologies such as phones, computers, and televisions also wouldn’t be possible without petroleum. And what about all the plastic in our everyday lives? Without refined petroleum, you wouldn’t have that either. 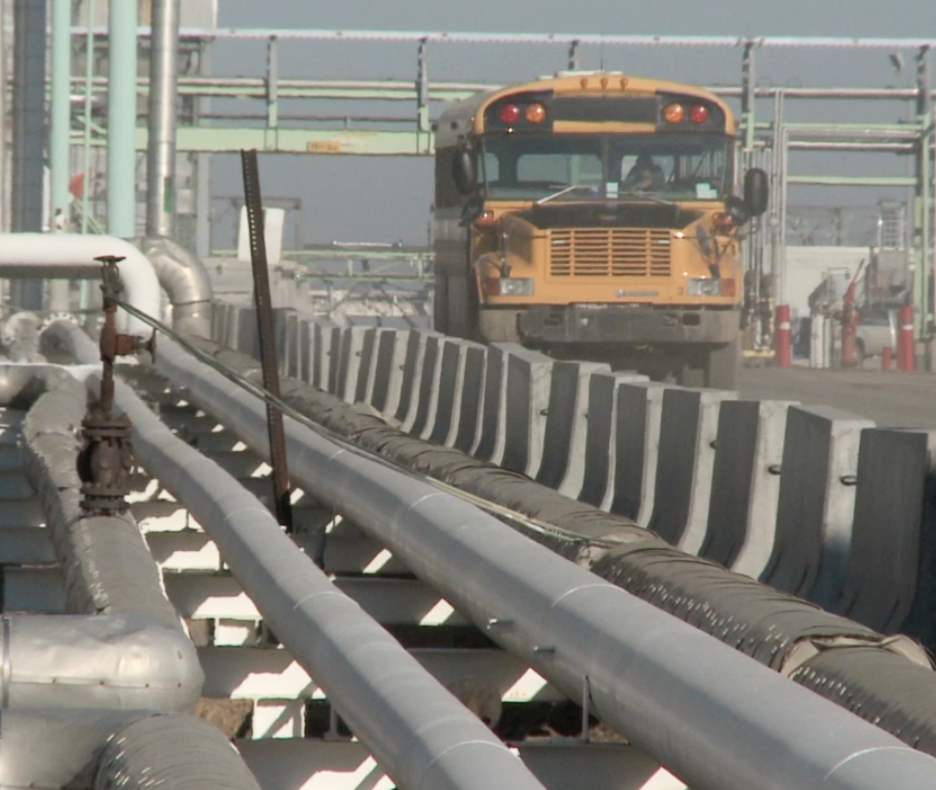 In other words, without refined petroleum products, the United States would probably look like it did 120 years ago. So how did we become so dependent on these fuels and how were they originally developed? To answer that question, we need to go back in time to the 1840’s.

The petroleum, or oil refining, industry got off to a strange start. Samuel Kier, a salt miner in Pennsylvania, kept noticing a strange, foul-smelling liquid that appeared when he struck into new salt deposits underground. Ever the businessman, Samuel noticed that this material had unusual qualities and his first thought was… medicine. He bottled the liquid and sold it for people to drink. It’s probably safe to say that drinking crude oil did not cure very many diseases.

Fortunately for us all, Kier had a much better idea. One day when he was lighting his cigar, he suddenly noticed that the liquid he bottled was also very flammable. No problem, those whiskers will grow back. He had the brilliant idea that this stuff could be used as a fuel for lamps. At the time, most lamps were fueled by whale oil. Whales were becoming extremely rare and their oil was becoming very expensive. Kier worked with a chemist, James Booth, to distill crude oil into a fuel that burned with far less smoke and smell. 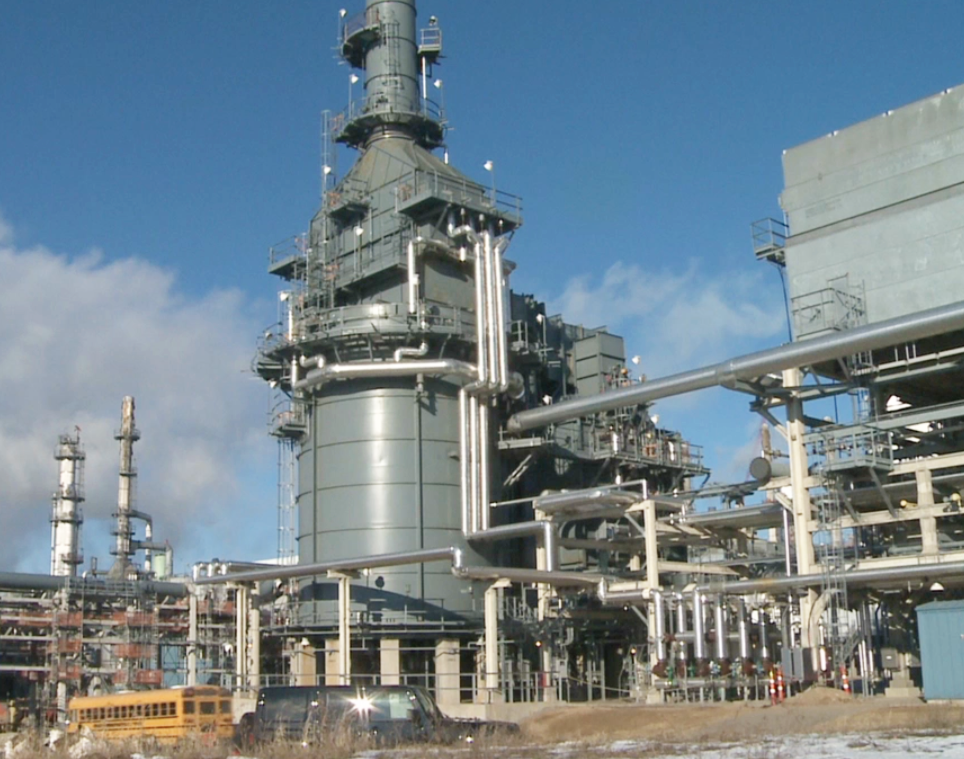 A man walking by a shop in Pittsburgh, Pennsylvania, where Kier was based, noticed a flier in the window. It said that the oil for these new lamps came from underground. His name was George Bissell and he decided that he would try to drill for some of this oil at a farm he owned near Titusville, Pennsylvania. He lucked out. He struck oil 70 feet underground and started the “oil boom”. At the time, there were only a few refineries in the country. By the early 1860’s, there were 58 in Pittsburgh alone.

Oil isn’t just business, however. It’s science too and, as with any major industry, advances in science and technology allowed the industry to really prosper. When John Rockefeller started the Standard Oil Company, oil was distilled in ways far different than that seen in this video. Scientists used very basic chemistry and couldn’t figure out how to get rid of that stinking sulfur. As engines got better and the need for efficiency increased, the need for better methods of distilling fuels increased as well. 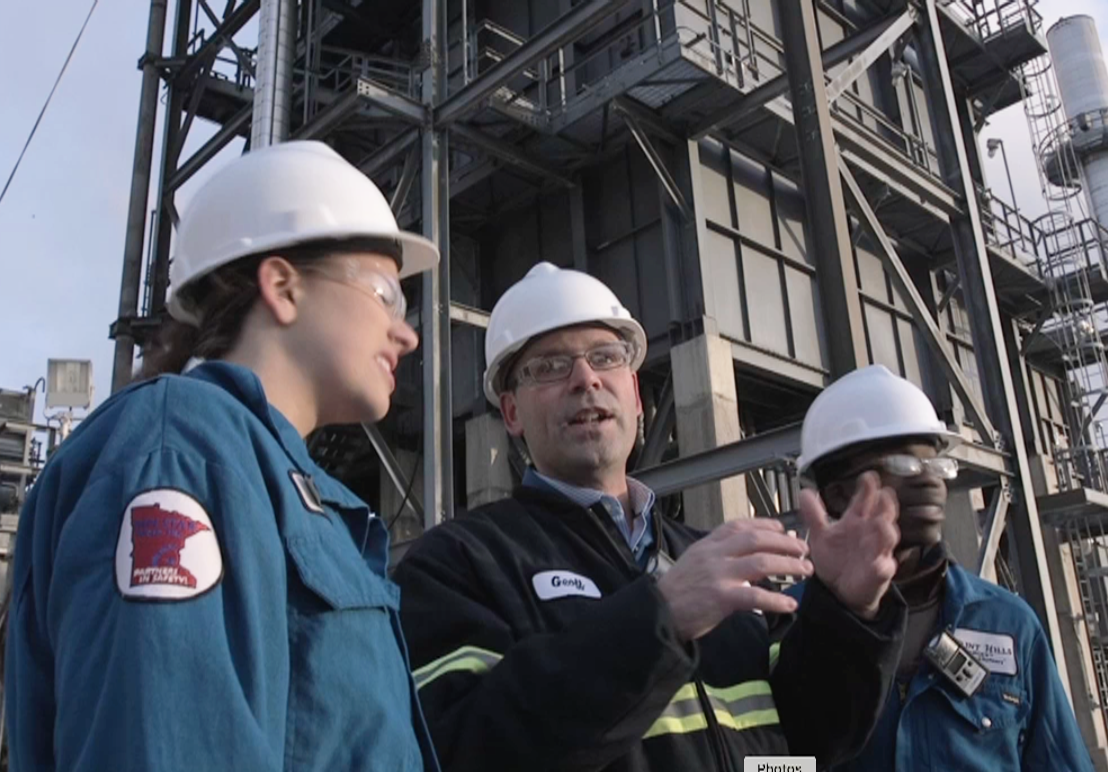 Technological advances now make it possible to turn crude oil into a large number of different products. In the early days, crude oil was heated in a tall distillation tower and basic fuels were produced under high heat. Chemists began to experiment with catalysts, substances that speed up chemical reactions without going through a chemical change, which allowed even more products to be created.

Now that engineers have hydrocracking down to a science, the main focus of refineries has been on their environmental impact. Oil engineers in the early days simply dumped the waste products into nearby waterways. Nowadays, the environmental impact of oil production is monitored and taken very seriously. 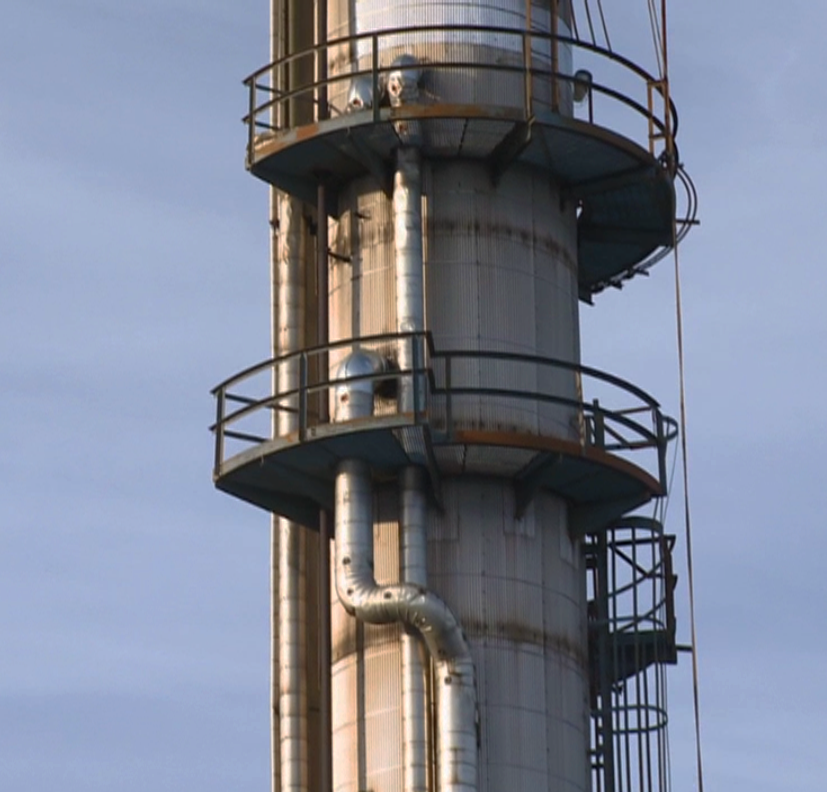 Oil can create a number of environmental concerns. The very process of burning it in our vehicles produces combustion emissions that contribute to climate change. Oil spills, whether they stem from ships or pipelines, can also devastate ecosystems. The oil industry recognizes these issues and many companies, including Pine Bend Refinery and Koch Pipeline, continue to make improvements that will benefit the health of the environment.

Watch the video to see how the Pine Bend Refinery is minimizing their environmental impact and how far advanced their technology has evolved compared to the first attempts at refining crude oil by Samuel Kier all those years ago.